Tonight I made a cranberry beef roast in my slow cooker.  This recipe is adapted from the Slow Cooker Cranberry Roast I found on my favorite recipe site AllRecipes.com.  Today was the second time I've made this recipe and I made it slightly different both times.  But both times it was a big hit with Honey-Hub and he had high praises for the adaptations I made to the recipe.

Here's how to cook it.  The second time I made it (today) I decided to add mushrooms to it for a rich mushroom gravy.

2 or 2 celery stalks, washed and chopped in to 2" pieces
1 cup (approx) chopped dried or fresh mushrooms.  I use the dried mix that Costco sells in the huge, tall container.
1 or 2 sprigs of fresh rosemary
1 small bottle (6-8oz) of either red cooking wine or a full-bodied wine such as a Merlot or a Cabernet
salt, pepper, garlic powder (to taste)
flour or cornstarch (for thickening)

First I tenderized (not heavily... just a little bit on each side) the roast with my Pampered Chef meat tenderizer (that also doubles as a weapon in a pinch). 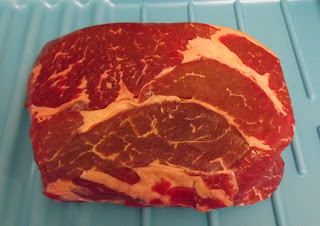 I then rubbed a mixture of kosher salt, fresh ground black pepper and garlic powder over the whole roast. I did a light rub as the soup mix contains salt and other spices.

I sprinkled the package of dry soup mix on the bottom of the (empty) slow cooker.

I then placed the tenderized and seasoned roast on top of the dry soup mix.  I tucked a few (4-5) loose leaves of the fresh rosemary in to slits in the roast.

I placed the cut celery and the mushrooms around the roast in the slow cooker.

I peeled the garlic, smashed with my chef's knife, and placed them in with the celery and the mushrooms.

I then took the jellied cranberry sauce out of the can and sliced it in to 1/2" slices.  I placed the slices over the top of the roast.

I put the rosemary sprig on top of the cranberry sauce.

Over everything I poured a small bottle of Cabernet Sauvignon wine.  I like these wines that are put out by Gallo in 187ml 4-packs: 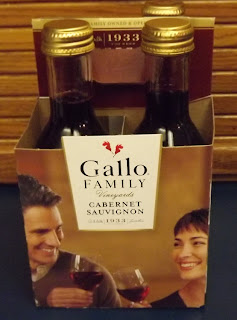 Then the lid was put on to the slow cooker and it was set to cook on low.  There's no need to stir anything.  You can literally just walk away and check on it in a few hours.  The cranberry sauce will liquify and along with the juices and fats from the roast, plenty of liquid joins the wine to keep things moist. 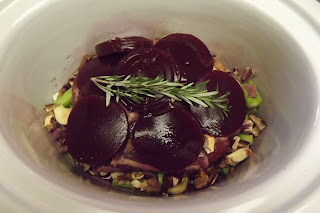 How long to cook is always a challenge.  I have a newer slow cooker and the sucker cooks hot and quick if I don't watch it.  Every recipe I have ever followed in my slow cooker needed a lot less time in my cooker than the recipe called for.  Tonight I pulled the roast out after 4 hours and Honey-Hub said I probably could have pulled it 30 minutes sooner.

About 4 hours later, the roast was cooked. 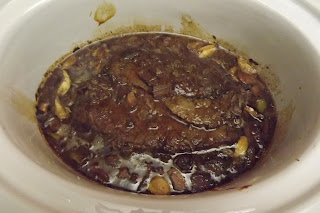 I turned the slow cooker down to "keep warm" and turned on the oven for the Japanese Yams (teaser.... instructions for these will follow soon).

I pulled the roast out and put it on a plate to rest. 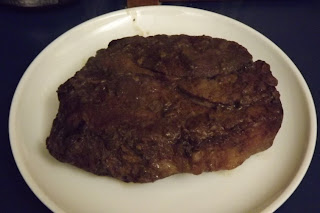 I then thickened the remaining liquid in to a rich gravy and added the mushrooms and garlic back in to it.

...and along with a Japanese Yam and a fresh roll, dinner was served! 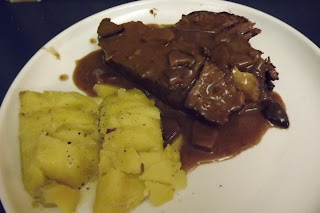 We have more than enough for leftovers tomorrow night.

Posted by The Simmering Wench at 8:20 PM 2 comments:

Good cookware is important.  It really is.  It amazes me how long I've tolerated old, worn out or just plain cheaply-made cookware.  Good, quality cookware makes so much difference in my ratio of successes in the kitchen and my level of enjoyment.

A few months back I bought two new baking sheets at a local discount mart.  One of them is a large, sturdy metal one made by Wilton.  The other one, which was half the price of the first one, was a no-name brand, thin, flimsy piece-o-crap.

I hate that baking sheet.  It's going to get handed down to the Honey-Hub for him to use in the garage-man-cave.

I LOVE the Wilton sheet and every time I would bake up a batch of bacon (see recipe below), I had to do two rounds in the oven as one sheet is never big enough for a whole pound of bacon.

I really love every product I have ever bought from Rachael Ray's line of cookware so I decided to go see what she offers in the baking-sheet-arena.  SCORE! 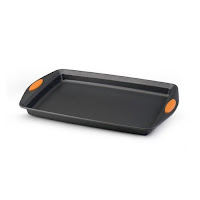 I am now the proud owner of TWO of her Oven Lovin' 11"x17" Crispy Sheets.  I've used them once now to bake up a batch of bacon and they worked perfectly and cleaned up easy.  I would definitely buy them again or give them as a gift.  The orange rubber imbedded in the handles make grabbing the sheets an easy, no-slip process.

She also offers it in a 10"x15" size and I will probably add two of those to my collection in the near future.  And for those of you who want a whole set, well, she makes that too although the set does not include the large crispy sheet that I bought.


Baked Bacon
(forget frying!  Why deal with the mess?)

Posted by The Simmering Wench at 7:00 AM No comments:

Putting the pot on to simmer

Welcome to my new blog!

I'm a work-at-home accountant by day and a wife by day and night.  I handle most of the grocery shopping, meal planning and cooking for my husband and myself.  Over the past few years, I've started to take a lot more enjoyment out of cooking great meals.

I *think* I'm approaching the status of "gourmet cook."  I believe in high quality ingredients and cookware.  If we had a better kitchen, ie more room and a gas-powered range (vs the electric one we have) I do believe I could achieve that coveted "gourmet" status.  Until then I suppose I shall be an "almost gourmet."

The older I get, the more picky I am about what we eat, what I take the time to prepare, what ingredients I use and the equipment I use to cook it.  I find that as we age, food becomes more of an experience to savor and less of a means to supply our bodies with energy.  We become more selective about what we eat, choosing quality over quantity.  And as our budgets grow and allow, we are much more likely to buy (and use!) that $30 bottle of rare, aged balsamic vinegar over the (much!) cheaper stuff out there.  A high-quality aged balsamic can add so much depth to a recipe.

My mother was a true gourmet cook when I was growing up and she taught me much of what I know with the basis to not be afraid to be adventurous and try new ideas.  As a result of that, I am very confident in the kitchen and I am often composing completely new recipes in my head.  I rarely follow a recipe completely and often change or add ingredients.  99% of the time, the recipe is improved.

I often post on Facebook about what I am cooking and many of my friends seem to enjoy my posts.  So, I decided to start writing this blog as a diary of my cooking adventures with pics and recipes.  I enjoy writing and this will be a nice diversion from my busy accounting life.

Posted by The Simmering Wench at 11:42 AM No comments: